The game commentary is in Japanese, and the in-game text is google translated.
Please subscribe to the channel!
I will do my best if it increases!

※※ Because it is a zombie type, those who are not good at reading should be careful! ※※

The third Nightmare Collection! !!
It is a zombie horror ADV released in 1993.
This is the story two years after the previous work (DEAD OF THE BRAIN).

–Synopsis–
Two years after the horror and tragedy of the loss of precious lives of many people, including Doc.

Call and Sheila left the familiar town that had stopped functioning properly and moved to a neighboring town.
One day when he gets used to his new life, Cole proposes to Sheila and makes an engagement.
It was passed on to his friend Terry, who took his girlfriend Lynn to Cole’s apartment and congratulated them until late at night.

After the feast, Cole and Sheila were chatting and biting a little happiness ahead of their trip to Canada tomorrow.
Meanwhile, Sheila goes shopping and finds the corpses of Terry and Lynn, who should have returned home about 10 minutes ago, under the apartment.
The bodies of the two had traces of brain-eating, and new drugs had adhered to Cole and Sheila’s memories around them.

The drug is an Medicine to revive the dead.
Fear and tragedy saw Cole and Sheila, who once defeated them, as ghosts and were about to attack again. 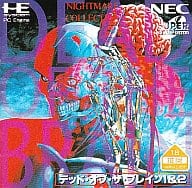